PILOT PREP-WHAT DOES IT MEAN FOR YOU?

PILOT PREP-WHAT DOES IT MEAN FOR YOU?

Pilot season. You’ve heard the term. But what does it actually mean for you and your acting journey? It’s a great time for actors to get cast in an upcoming series. But when is pilot season? When should you be prepared? What is more important – network or digital platforms? Why should you care about Pilot Season as an actor? Where should you go to prepare for pilot season auditions?

WHAT IS PILOT SEASON?

A pilot, also known as the first episode of a new show, is submitted to networks (ie, NBC, CBS, NBC, FOX, etc.) by scriptwriters for approval to be picked up as a regular series. During Pilot Season, that first episode will be cast, produced and tested on audiences, whose response to the show will give the networks the feedback needed to decide whether to move forward with a particular show. It’s truly a make-or-break time for scriptwriters and the projects they hope to have picked up by the studios. It’s also a magical time for many actors. There are hundreds of pilots being produced all over the country with many of them being filmed right here in the state of Georgia.

WHY DOES THIS MATTER TO YOU AS AN ACTOR?

Pilot season is a new start for everyone. Producers are constantly on the lookout for fresh faces for their pilots. Actors that are auditioning for guest stars, are now being cast as series regulars and actors that have been co-stars are now being considered for guest stars. Essentially, everyone moves up in their audition opportunities. Think of it as a blank canvas with infinite possibilities. Auditioning for a series regular on an already established show is a great opportunity, but your chances are slim of actually booking the job without any credits. However, pilots are where you can shine. There are literally thousands of new roles for the taking. The question is…..will you be prepared when these audition opportunities arise? Remember Friends? Those six leads were virtually unknown when they were cast (with the exception of Courtney Cox, who had a recurring role on Family Ties, as the girlfriend of Michael J. Fox). In fact, our very own Catapult instructor + coach, Betty Monroe, has just been cast in a lead role in a new pilot (more on that later).

WHEN IS PILOT SEASON? 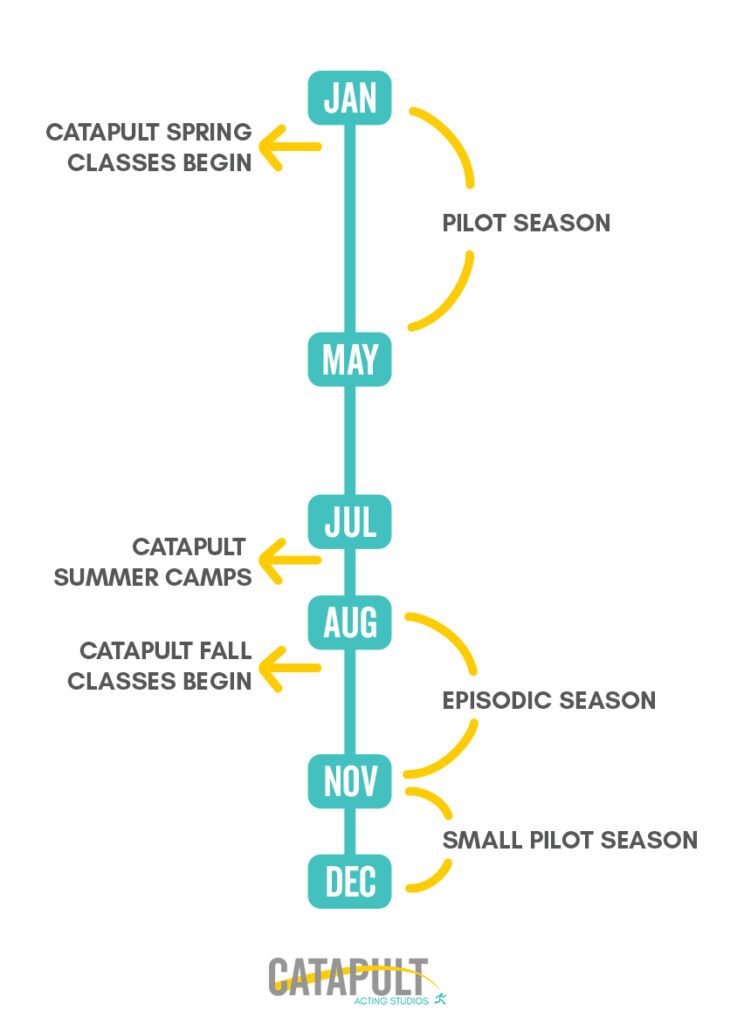 A traditional pilot season is the period of time between January and April when the studios create samples of new shows.

Network Episodic Season normally begins in the month of July.  That is when the pilots that have been ordered begin to cast and return to production. The networks (ie – ABC, NBC, CBS, etc.) each choose 20 pilots to shoot from over 70 pitched scripts. After the pilots are produced, they are then presented to the network + studio executives, who pick between 4 to 8 shows to present at The Upfronts, which is a gathering at the start of important advertising sales periods, held by television network executives and attended by major advertisers and the media.

WHAT CAN YOU DO TO PREPARE?

This is the perfect example of luck = when opportunity meets preparedness!

Here are a few examples of ways to prepare for pilot season:

– Update your personal information. This is the time to replace those old headshots with fresh ones, renew your old footage with more up to date reels that are labeled for different genres (ie, comedy, drama), and update your resume.

– Stay healthy! Fine tune your most important tool – your body! Eat well and stay hydrated. Get plenty of rest, workout and keep your head clear with your favorite activity. Meditating, practicing yoga or even taking a walk in nature will keep you grounded.

– Communicate with your team. Discuss with your agent + manager the types of roles you would like to be submitted for and how you’ll confirm auditions.

– Book your self taping sessions at Catapult Acting Studios.

– To maximize your pilot season potential, join us for our Pilot Prep Workshop below: