WHAT IS THE AUDITION GAUNTLET?

AUDITION GAUNTLET is a three-day intensive providing actors with in-depth training and the opportunity to execute a “mock audition” for three different industry pros…back to back to back!

Actors will need to prepare a 1.5-3 page script (please come off book), preferably with only two characters, that best showcases your acting ability. We will include a link to our scene database in the confirmation email.

(NOTE: Even though we are sending you scene options, we highly suggest you find a scene on your own, ideally one from a TV show or movie, not a mock script someone wrote and shared on the internet) It is absolutely fine to select a scene that is longer that you edit to cut to the appropriate length. We also advise scenes without graphic language. The goal should be to find a dynamic, well written scene that really showcases your abilities as an actor!

THIS THREE DAY WORKSHOP WILL COVER

– Memorization Techniques
– What do agents look for?
– What do casting directors look for?
– Keys to “owning the room”
– How to let go!
– Embrace your authenticity
– Create a winning mindset
– Craft a compelling character

DISCLAIMER: DEAR ACTOR, Please note that this class, as with all of our others, is specifically designed to educate and train, NOT to get you representation or guaranteed employment.

– Two of Catapult’s top coaches provide valuable insight on how to best prepare your scene and role!

– Following a brief breakdown of the weekend with both actors and their parents in attendance, and warm-ups with the actors, each student will be given the opportunity to put their scene on its feet in front of the instructors. The purpose of this will simply be to make sure each actor’s scene works for them, in terms of character, genre, scene length, etc. If any tweaks are needed, or if the scene does not work for the actor, the instructors will assess and address. Following the scenes, instructors will give overall feedback, notes, and what actors need to work on prior to Day 2.

– The overall focus on the second day is IN-DEPTH scene work. It will consist of focused script work, character development, and audition preparation. Each actor will be given ample time to work on, adjust, and strengthen their scenes in front of the camera. The goal being for every actor to feel fully prepared for the Gauntlet on Day 3. Instructors will also answer any specific questions the actors have.

– Time for the Gauntlet! Each actor will rotate between three rooms, executing their scenes for two Top ATL Industry Pros in person, and via Zoom with a Top LA Pro. Actors will be given feedback and direction from each of these Pros. Once all students have completed their Gauntlet, there will be a Q&A with all three of the Pros. Parents are encouraged to attend the Q&A.

Shaun MacLean is an Actor, Producer, and Director who grew up in Norcross, GA and graduated from UGA in 2015. He very proud to be a Georgia native in the thriving TV & Film Industry here!
Though Shaun came up in the industry as an actor, he has found success these past few years on the other side of the camera as well. He has been producing and casting with the production company Rising Act Films, a non-profit who creates narrative short films for a cause. Shaun has produced and directed several commercials for local, national, and international companies. He has also directed plays with Act for a Change Theatre, has run self-tape audition workshops, and has taught Meisner-based acting classes.
Just like the kids at Catapult, Shaun began his acting career at a young age. He loves giving back to help these young actors dig into the craft early and pursue their dreams!

Jaron Matthews began his career in the entertainment industry unlike many. At the University of Georgia, Jaron majored in broadcast journalism with a minor in theatre. During his time at UGA, he excelled as a production assistant, reporter, and anchor, but he quickly realized that journalism was not his greatest passion.

His performance in Los Angeles led him to intern at J Pervis Talent Agency while completing his undergraduate degree. Jaron’s unrivaled customer service skills and his uncanny ability to assess situations allowed him to rapidly excel. In addition to receiving multiple job offers in both Atlanta and Los Angeles after graduation, Jaron was promoted to Joy Pervis’ assistant. He assisted in working closely with the agency’s top tier talent on projects such as “Stranger Things,” “Chicago PD,” “Outsiders,” “The Walking Dead,” “ATLANTA,” “Underground,” and many more.

Jaron’s dedication, drive, and passion for the industry quickly earned him a top spot as lead agent of the theatrical team at the J Pervis Talent Agency.

Jami Rudofsky has been casting television, film and theatre in Los Angeles for over 20 years. Casting Credits include the original Gilmore Girls/CW and Gilmore Girls A Year In The Life/NETFLIX, Grown Ups 2, Masters of Sex/SHOWTIME, EMMY nominated Conversations in LA/AMAZON, and Stargate Origins/MGM. Jami has been the Resident Casting Director and Artistic Associate at the award winning Celebration Theatre for 13 years. Jami’s background in casting, teaching, and in acting gives her a great understanding of the plight of the working actor. She approaches her work with actors from a place of deep respect and spirited collaboration.

Dexter received a BA in Dramatic Arts from the University of Southern California. He furthered his training at the renowned acting conservatory BADA in London, as well as studied under Hollywood’s top acting coaches. His credits include the hit Disney Channel show Dog With A Blog and the CW’s Jane the Virgin. He most recently appeared in the new Cedric The Entertainer-produced show Johnson.

For Christen, this art form is a beautiful canvas that gives her the freedom to paint as she sees fit and marvel in the sweet moments of truth and authenticity. She loves co-creating with other artists and encouraging them to be their best self on any given day. She also has a ‘personal knack for analyzing network and cable formulaic mediums’. Her life motto is, “Never get too comfortable as life throws many curveballs”.

DISCLAIMER: DEAR ACTOR, Please note that this class, as with all of our others, is specifically designed to educate and train, NOT to get you representation or guaranteed employment. 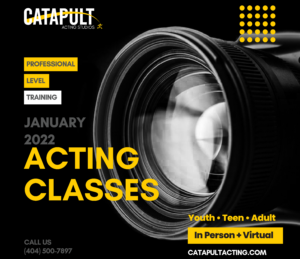